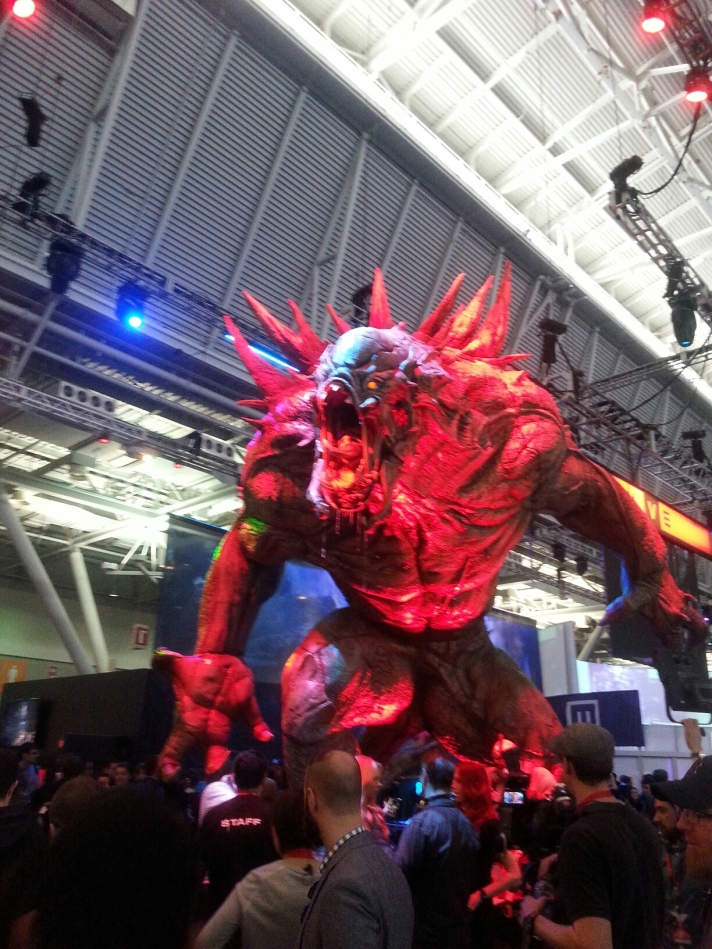 So I am at Pax East this weekend. I already hit up Friday which was awesome but didn’t have enough time to see everything.

There are a lot of good titles on the showroom floor. Evolve being one of the biggest displays there.  Wildstar had a rather short line to show off both it’s PvE and PvP content. The Evil Within showed some real time gameplay footage that made me both happy and a little worried for the title.
I also played a couple of indy games.  A solitare game that was pretty fun and a Smash Bros clone called Brawlhalla.

I liked Wildstar. The artwork is awesome. Neon glowing weapons and body accessories is visually appealing and gives Wildstar it’s own style.
The game doesn’t take itself seriously, which is another differentiator from other MMOs. Everything about the game screams fun.
It is an MMO though with a subscription which means it has to dig its claws into their players.
When the game drops, I will try it for the free month and see where to go from there.

The Evil Within is a game that utterly terrifies me to a level where I don’t think I can play it out of pure fear.  The demos I watched kinda disproved that. It has that flavor of Resident Evil that I have been missing since 4.
The first demo was base more on action. Weapon usage and swapping. It seems that several weapons will have different ammo types, and you won’t be able to stock up massive amounts of ammo. So it seems that the survivability is now up to proper standards.
The second demo seemed to be more involved with puzzle solving. As a bulking creature with a safe wrapped in barbed wire chases you around, you need to get out of a basement that is filling up with a toxic gas.
Overall, the graphics seemed nice, but not next generation nice. I think it was being played on an Xbox 360 rather then an Xbox One.
The framerate got a bit choppy at times, but it didn’t seem to take too much away from the otherwise creepiness of the title. Now maybe I can play it without rapping my pants.

The last mention I can give is to is Brawlhalla. From a distance, it seems like a Super Smash Bros clone, because that is what it is.  It is based off of Viking lore, but with a rather cartoony twist.
Everyone has the same abilities in battle but once you pick up a weapon, your moves change to fit that specific set of weapons. It’s an interesting take on the style of SSB.  I don’t know if it will be incredibly popular, but it was charming enough to mention.

Well, I’m off to day two of Pax East. Peace out.

Comedian, writer, and Dungeon Master hailing from Long Island. I like to write opinion pieces and stories about heroic adventurers. View all posts by Steve Esposito